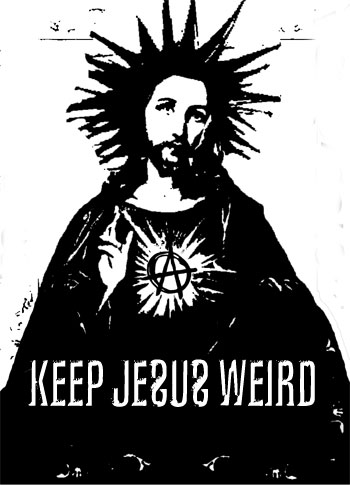 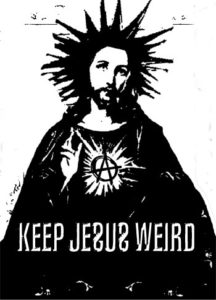 There’s a slogan that started in Austin, Texas back around the year 2000 that went like this:  “Keep Austin weird.”  Since then it’s been adopted by Portland and other cities that value personal expression. It also communicates how residents value local art and business as opposed to predictably dull franchises and lowest-common-denominator culture.  Those who champion the slogan are saying, in effect, weirdness is good. Weirdness sets us apart as unique and interesting. Let’s preserve that character.

BEHOLD! Magazine was born from the same keep it weird sentiment, but in regards to Christian subculture.  “Keep Jesus weird!”  Another way to say it might be Keep Jesus Other.  Let me see if I can explain.

I grew up in Hawaii and North Carolina, my family bouncing through various churches. My father was a gifted pastor who had an iconoclastic streak that always seemed to put him at odds with religious folk. He never seemed to fit in with the status quo.  I was another sort of misfit. I loved reading mystery, fantasy/sci-fi, and comic books from an early age. I also loved reading the Bible, which was the most mysterious and fantastical book of them all. There was a commonality between what I learned from my dad and my reading interests. Life, faith and the stories worthy of shaping our lives tend to unsettle us and cause us to be at odds with the status quo.

In my teen years, drugs, drink, and women sang like sirens.  I could have easily drifted away from my Christian faith forever.  It was the discovery of Christian metal and punk, which dropped into my world like a flaming meteor, that grabbed my face and turned it back toward thoughts of eternity rather than temporary pleasures. At the same time, I was enthralled by bands like Black Flag, Sepultura and all kinds of outsider subculture in between. Though I continued to love underground punk and metal of all perspectives, what most interested me was that paradoxical pairing of Jesus with metal, punk, and indie rock. Jesus meets counter-cultural teen angst? It was absurd and subversive. A negation of negation. The thing that should not be.  An underground below all other undergrounds. “Christian punk” was rejected by all. It was the most counter-, the most sub-, of all the cultures a young person could navigate in the late ’80s and ’90s.

Zines like Heaven’s Metal, White Throne, Thieves and Prostitutes, This Prophecy, and others covered these strange bands. They helped create a sense of community and shared mission between the bands and fans alike.  The bands covered in those magazines played live at festivals like Cornerstone and TOMFest.  Record labels like Intense, Blonde Vinyl, Tooth & Nail and others provided the apparatus for the bands to record and get their music to the fans.

From the mid-80s to the early 2000s, this counter-subculture pulsed with life.  Bands sang, shouted, screamed and growled their lungs out about their faith in Christ, sin, salvation and all the struggles of life in between. And there were fans like me who listened, and shared that same faith and those same struggles.

Over the same span of years, many of the record labels, bands and zines created by Christians seemed to grow tired of their weirdo status. They clamored to fit into the mainstream as “normal.” Eventually, this strange Christian counterculture got eaten up by mainstream culture, was repackaged and sold back to the public. But something vital seemed to get lost in that process.  As with any culture shift, there are many factors that cause these changes.  We hope to explore them all in this magazine.  But whatever their reasons, many of these bands seemed to stop overtly articulating their faith through their music, and the weird quality of this subculture waned.

Today there are bands from this old scene trying to make comebacks, floundering in the debris of a music industry hammered to death and left at sea by the digital revolution. And there are many new bands trying to sing artfully of the hard mysteries of faith in today’s musical language.  But the magazines that covered the subculture are either gone or faint shadows of their former selves.  The big music festivals, those messy communal gatherings, are no more.  The faith convictions of fans and musicians have changed over time.

Whatever past fans and bands think of this subculture now, this “scene”, currently seems to lack a sense of community. And we want to call attention again to what was good and praiseworthy about the music of the past, shine a spotlight on what is weird and notable in the present, and start up the conversation again. And with a little luck and thoughtfulness, we hope to bring some depth to the conversation and emphasize the serious and expansive teachings and experiences of thinkers, philosophers, and writers who have considered Christian faith.

Christians who take an interest in underground culture are oddballs. You can call it whatever you want.  Maybe you think something like “Christian death metal” is an oxymoron. The equivalent of non-alcoholic beer. And you might be right. But then think about the oddness of the Christian tradition. The Hebrew and Christian Scriptures, the prophets, the Gospels, and the letters of the apostle Paul and the apostles show the God of the Bible to be one of strange mystery. Yahweh’s name couldn’t even be written or spoken.  The story of God’s chosen people is counter-intuitive, and full of total human failure. And yet these people’s God continually and lovingly pursued them despite their obvious flaws. Later, Jesus’s message came in odd parables about hidden treasure and tiny seeds or pearls, so that only “those with ears to hear” could hear. He told his followers they would always be hated; in essence, always the weirdos. The story of Jesus dying on the cross is articulated by the apostle Paul as a victory somehow. Though at face value the cross looks on the outside like the utter defeat of a well-intentioned holy man. But then Paul repeatedly spoke of Christ and the gospel as a stumbling block, an offense…foolishness.

The point is Jesus and the Christian faith are strange. Couple that strangeness with pop music and–better yet–underground music, and you have a weirdness cocktail we think is worthy of conversation.  It’s out of this point of view that BEHOLD! is born. It’s our aim to revive community around the strange phenomenon of all those past and present who make counter-subcultural, intellectual, literary, visual, and musical art in orbit around the figure of Jesus Christ.  And we hope to cover these subjects even better than has been done before.

As Editor in Chief my personal view is merely one of many.  Not particularly more valid than any other, just mine.  Whether fundamentalist, progressive, evangelical, catholic, agnostic, mystical, even atheist…everybody on the Jesus spectrum has a welcome point of view in BEHOLD!  We just want to do our part and Keep Jesus Weird.